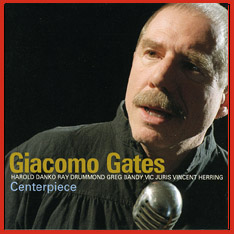 “On and off the bandstand, Giacomo Gates fits the profile of the suave, cool jazz singer with ease. He favors stylish dark clothes for his tall, broad-shouldered frame, exudes a mixture of confidence and charm typical of a professional entertainer and casually drops hepcat slang into conversation, saying ”I’m gone,” for instance, instead of ”goodbye.”

“The unique ring he wears on the pinky of his right hand, made from a big gold nugget, tells another story altogether, though. From 1975 to 1988 Mr. Gates, worked as a heavy equipment operator in Alaska, building roads mostly, during the construction of the oil pipeline. It was a rough-and-tumble frontier existence, he said, and the ring was bought with one of his bigger paychecks.”

“But for the past 15, Mr. Gates, a Bridgeport native, has seen his popularity rise steadily in the jazz world, and today he is regarded to be one of the leading practitioners of vocalese, a challenging mode of singing a lyric that has been matched to a previously recorded bebop instrumental solo, at a tongue-twister pace.”

“Mr. Gates gained more attention in the fall with the release of his third album, Centerpiece, which reached No. 12 on the National Jazz Playlist chart. Since then, offers for club and concert dates have been rolling in, and he has even been booked already for some shows in 2006.”

“Actually, what gasses me the most is that the musicians I’m working with — all world-class people — look like they’re having a great time when we’re playing, and they’re telling me that my music is solid and refreshing,” said Mr. Gates. ”The material is different from what a lot of other cats are doing, and yet audiences are loving it. This is the kind of validation that I really appreciate.” At a recent appearance at One Station Plaza in Peekskill, N.Y., Mr. Gates showed he knows how to win over an audience. Accompanied by a guitarist and a bassist, he started his set with ”Lullaby of Birdland,” written as an instrumental in the 1950’s by the pianist George Shearing but now featuring several stanzas of lyrics written by Mr. Gates extolling the history of the famed Manhattan jazz club. Next up was Bobby Troup’s novelty tune, ”Hungry Man,” a food-filled travelogue of where the singer will go around the country for different delicacies, which elicited chuckles from the audience of 50 or so. Then, during a cover of Cole Porter’s ”You’d Be So Nice to Come Home To,” Mr. Gates supplied a vocalized virtuoso ”trombone” solo that brought the house down.”

“While a number of current jazz artists include or incorporate vocalese in their singing style — Bobby McFerrin, Al Jarreau and the vocal group known as the Manhattan Transfer are probably the best known — its inherent difficulties ensure that the club of adherents will be somewhat exclusive.”

“Jon Hendricks, a progenitor of vocalese in the 1950’s, said in a phone call from Los Angeles (where he was set to receive a Lifetime Achievement Award at the Grammys) that because the vocal style is just a generation old, singers are still trying to figure out its intricacies.”

“Young folks are taking up vocalese, representing their own generation and helping to broaden the audience for the music, and Giacomo is among those singers and prominently so,” said Mr. Hendricks, 83 and living in Toledo, Ohio. ”Not many people can master this music, but Giacomo has. He’s an important man.”

“The only child of a dressmaker and a welder with a penchant for big band jazz, Mr. Gates – he changed his name from Agostini when he started performing — learned guitar and then took tap dancing lessons for several years. By the age of 10, he said, he was listening to singers like Cab Calloway and Jimmy Rushing as his peers swooned over Elvis Presley.”

“A love of the outdoors and physical labor led him to drop out of what was then Norwalk Technical College and become a construction worker.”

“Mr. Gates moved to Fairbanks, Alaska, in 1975, and soon he was working farther north on major projects spurred by the oil boom. But he never lost his love for music, and with lots of money in his pocket he started buying jazz records by the dozens and studying them. Intrigued by vocalese, Mr. Gates began writing lyrics, and before long he was ”sitting in” at nightclubs and singing.”

“Mr. Gates would probably still be in Alaska, he said, if he had not met the late jazz writer Grover Sales at a clinic for vocalists at the Fairbanks Summer Arts Festival in 1988. Mr. Sales recognized his talent and persuaded him to move back east right away to pursue jazz, said Mr. Gates, which he did. ”Having someone like Grover to push me early on made me realize that I had something special,” Mr. Gates said recently over lunch at Pizza Time, his favorite pizza parlor in town.”

“Back in Bridgeport Mr. Gates tried to continue working construction while performing at night, but he finally decided to focus on music.

“He moved back to his childhood home in 1998 to care for his mother — she died two years later — and he still lives in the small two-bedroom Cape Cod in the Lake Forest section. It is an impeccably neat bachelor pad cluttered only by books, jazz CD’s and weight-lifting equipment.”

“As much as he relishes any opportunity to perform, Mr. Gates said teaching had become important, and for the past several years he has taught classes and private students at Wesleyan University, the Hartford Conservatory of Music and the Neighborhood Music School in New Haven. His growing renown has also brought in offers to lead the kind of vocal clinic where his own promise was first detected, and he has made three trips back to Fairbanks since 1999 to work with students there.”

“Last week Mr. Gates visited with two jazz classes at American University in Washington before playing a gig that evening, and the students benefited greatly, said Dr. William Smith, a music professor and jazz ensemble director at the school.”

“One of the main things the students were able to hear was how important the intonation and technique Giacomo uses is to telling the story in each tune,” said Dr. Smith. ”He weaved together his life experiences and music in a way that was really eye-opening for a lot of the students.”

“What is the real definition of jazz singing? This question has perplexed critics, fans and even musicians ever since Louis Armstrong redefined the entire concept of vocalizing nearly 80 years ago. Today, the answer to that question is even more elusive. But there is an answer. To re-work the old cliche “a picture is worth a thousand words,” a CD is worth a thousand dissertations; and that CD is the incredible Giacomo Gates’ Centerpiece on Origin Records.”

“Gates, who in 1989 abandoned a pursuit of adventure doing construction work in the wilds of Alaska to pursue a no less adventurous course as a jazz singer, is the living embodiment of that entire tradition. To undermine another cliche, that “those who can do; those who canít teach,” Gates not only teaches students of all ages at Wesleyan University, The Hartford Conservatory of Music and New Haven’s Neighborhood Music School, but also provides a full course in jazz vocal history with every live performance and recording. Centerpiece is a magnificent treatise on the subject.”

“Blessed with a beautiful and full-bodied voice, with extraordinary rhythmic precision and an unerring sense of lyricism, Giacomo’s total command of the vernacular, boundless creativity and exuberant passion set him apart from nearly every other vocalist on the scene.”

“Great care and thought went into the choice of material contained on Centerpiece, offering a delightful array of classic jazz compositions and selections from the Great American Songbook. Likewise, the accompanying musicians are also ideal choices. Pianist Harold Danko and bassist Ray Drummond are highly lyrical in both solo and supporting roles. Together with Greg Bandy on drums, the entire rhythm section brings unfaltering rhythmic creativity and energy to every track in extremely empathetic fashion.”

“Special guest artists, Vincent Herring on alto sax and guitarist Vic Juris bring their formidable talents to three and two pieces respectively. In true jazz tradition, the instrumentalists are given plenty of room in both solos and accompaniment, but the real centerpiece of Centerpiece is Giacomo’s gem-like vocalizing.”

“Giacomo’s smoothly beautiful voice, joyous verve and spirited inventiveness have been honed through the influences of the entire pantheon of the jazz vocal tradition, including Eddie Jefferson, King Pleasure, Jon Hendricks, Babs Gonzales, Dave Lambert and Leon Thomas. But equally important are the influences of lyrical instrumentalists like Lester Young, Lee Morgan, Charlie Parker and Dexter Gordon. Lester and Ben Webster always spoke of learning the lyrics to the songs they played to retain the true spirit of the composition. Gates turns that around, retaining the interpretations of the stellar soloists in the songs he sings. On three tracks, Giacomo utilizes the Jefferson/King Pleasure tradition of creating a vocal rendition of a great solo — all three of which were originally played by tenor saxophonists.”

“On the old Seymour Simons/Gerald Marks standard, All of Me, Giacomo displays his rich baritone and full range on an Illinois Jacquet solo lyricized by King Pleasure. A medley of the Lester Young classic, Lester Leaps In/I Got The Blues with words by Jefferson to a James Moody solo, is a vividly swinging driver that exhibits Gates’ amazing dexterity (pun intended). On the album closer, Gene Ammons’ Hittin’ the Jug/Swan Song (the title of the vocal version by King Pleasure) Giacomo pays perfect tribute to the deeply soulful style of the immortal tenorman, further emphasized by a soul-drenched solo by Juris.”

“Juris is also featured on the title track by Harry ‘Sweets’ Edison, providing remarkable interplay with Gates’ interpretation of the Jon Hendricks lyric. Vic’s fine solo climaxes over Giacomo’s vocal percussion punctuation. Two other examples of non-traditional “vocalizing” are also contained on the album. A flute-like whistling solo marks a fresh, nicely syncopated approach to the Gershwin masterpiece Summertime, along with the Jefferson lyrics. A tantalizing slowed-down version of Cole Porter’s You’d Be So Nice to Come Home To features a swinging “trombone” solo by Gates. None of these elements are contrived or showoff in any way, but rather just another color selected from Giacomo’s wide palette of sound.”

“Two more excellent cuts round out this outstanding CD. Bobby Troupís Route 66 is given a heavily swinging treatment after a vividly etched portrait in Gates’ introduction. Scotch and Soda, by Dave Guard (of Kingston Trio fame) is a dreamy, atmospheric, after-hours ballad in the Sinatra tradition, with Giacomo wrenching every ounce of nuance and emotion from the lyrics and melody, with remarkable support from Greg Bandy.”

“Like all great bearers of the jazz tradition, Gates is a deeply committed student of the music and an enormous fan of its unparalleled legacy. Not only are these qualities on full display in his music, but also in the way he speaks of those whose compositions and solos have inspired each piece in his spoken introductions and in the quotes contained in the liner information to the CD.”

“Giacomo is known for his interaction with his live audiences with witty patter and informative introductions, much in the style of other crowd-pleasing heavyweights like Art Blakey, Cannonball Adderley, Tony Bennett and Duke Ellington. Three of those introductions are contained on this CD, further enhancing those tracks for the listener with the sources of inspiration and historical perspective while also providing the flavor of Giacomo’s live performances.”

“Not only does Gates embody the entire jazz vocal tradition in his music, but also the sheer joy, exuberance, wit and unlimited creativity that make jazz such a profound art form.”

2023 Giacomo Gates  •  This site is part of JAZZCORNER

2023 Giacomo Gates
this site is part of JAZZCORNER