"As far as the eye can see, is the recommendation he gets from me."
- Jon Hendricks

"Gates is a bird of another color"
- Walter Bishop Jr.

"The Dennis Hopper of vocal Jazz"


There are no upcoming dates to display at this time.

Giacomo's Latest Recording
What Time Is It? 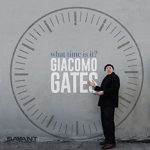 See all of Giacomo's Recordings

2021 Giacomo Gates  •  This site is part of JAZZCORNER

2021 Giacomo Gates
this site is part of JAZZCORNER